Good Eats (On the Cheap)

Finding a great meal in the Lehigh Valley isn’t difficult. Ask anyone you pass on the street where to grab a bite, and they’ll probably have a stellar recommendation for you, often within walking distance. Ask them where to get something for $10 or under, however, and they’ll probably draw a blank. Before you find yourself heading to Wawa on East Coast autopilot, you should know that such mythical meals do exist. While these casual kitchens might skip the luxe decor or unpronounceable accouterments, they don’t skimp on flavor. Here are five of the best—and most filling—meals that the Valley has to offer that won’t break the bank.

This tiny, understated taqueria might just serve some of the best tacos in town. Stop what you’re doing and go.

As with most good adventures in life, or at least in my life, this one started with chips. The complimentary tortilla chips at Aqui Es are freshly fried, still warm, and it’s impossible to just eat one. They come with a standard salsa, but owner Daniel Flores is quick to offer guests three specialty salsas, including a spicy avocado dip that is essentially guacamole with its training wheels kicked off.

Here’s the real reason to come, the reason why Domino’s and Papa John’s delivery guys are standing in line instead of eating discounted pizzas, why a group of construction workers are spending their lunch break here, why a trio of professionals and a family of five have all squeezed into tables in the cozy dining area: the tacos are amazing, and $5 fetches a trio of them. Selections range from Al Pastor—marinated pork with grilled pineapple—to Bistec—seasoned grilled steak. (In a refreshing change of pace, there is no “wrong” choice, but I highly recommend the perfectly seasoned Chorizo Taco.)

Hidden in the back, away from the shoulder-to-shoulder seating in the main restaurant, is a dining room. BYOB and prepare to get mad at yourself for having driven right past it all this time. 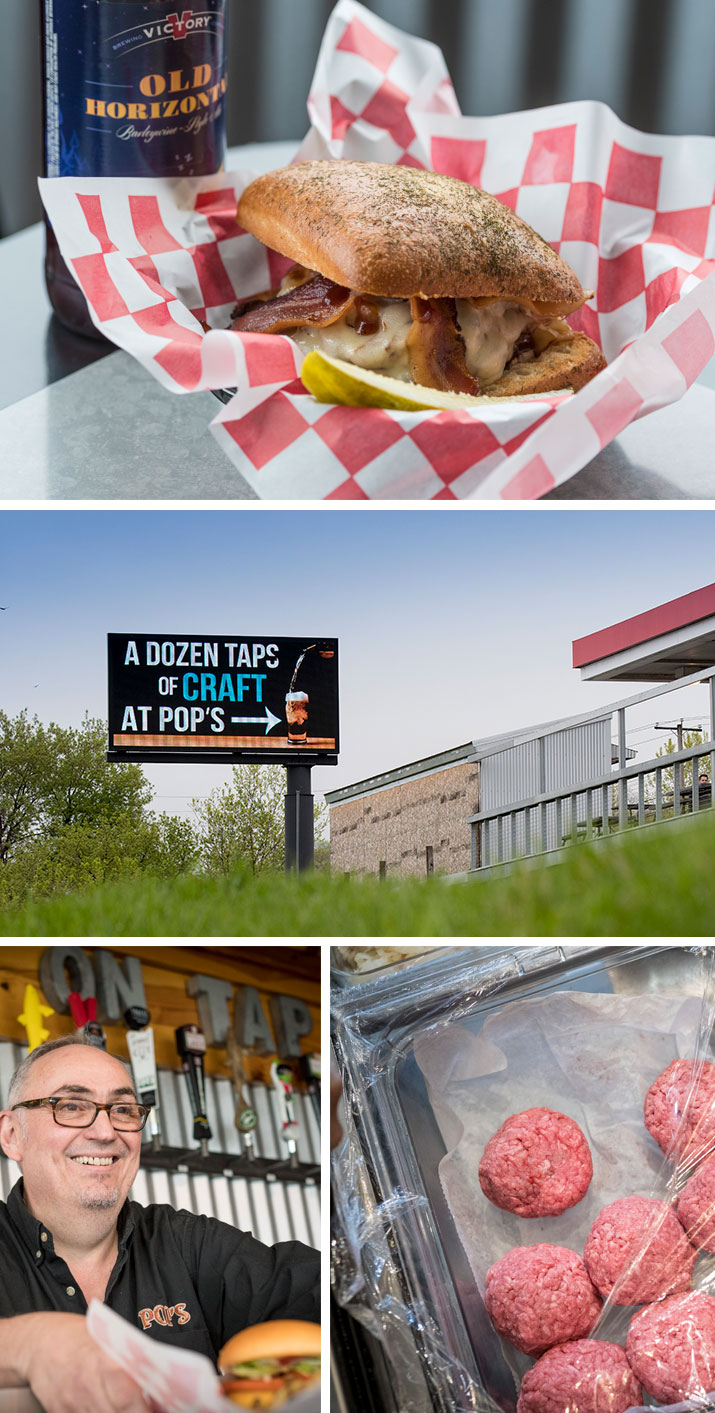 Pop’s has ostensibly been here for 22 years, but I’d never heard of it. Initially opened under the name “Interstate Market,” it emerged from renovations in 2009 with the new name “Pop’s,” a tribute to owner John Crivellaro’s father.

It’s almost anti-glam: from the dining room, there is a panoramic view of an Exxon gas station. A smattering of outdoor tables provide dining al freeway—the restaurant is literally a stone’s throw from I-78. Inside, handcrafted bar stools, made from old kegs, provide a comfy place to sit while you sip on a brew: Pop’s has a dozen taps spouting craft beer. Meanwhile, the menu offers hoagies and sandwiches, hot wings and fried shrimp, salads, and burgers.

The burgers are a 6 oz. portion of brisket blend that aren’t formed into patties until they’re dropped on the griddle. I opted for the Bacon and Shrooms Burger, which was messy, unpretentious, and incredible: the BBQ sauce was an accent—not a cover—to the meat, which was one of the juiciest burgers I’ve had. Fried mushrooms and onions added a ton of flavor, and the ciabatta roll was fresh, soft, and fluffy. This burger—and the entire establishment—is perhaps one of the Lehigh Valley’s most hidden gems. 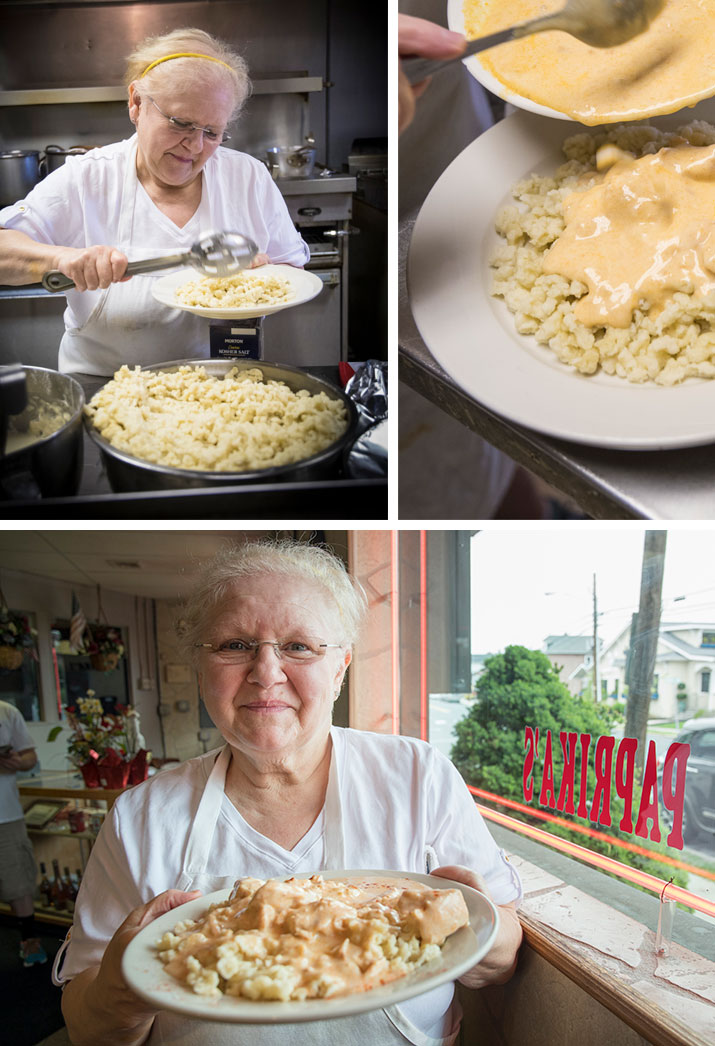 Book it to Hellertown for piping hot plates of Hungarian fare in quaint, homey digs.

Owner Nora Kralovits came to Pennsylvania from Hungary in 1987 and opened the restaurant in 1999. Hungarian dishes are awash in paprika, a bright red spice comes in eight different varieties, ranging from the delicate and mild to the more pungent. It’s with that well-seasoned foundation that she’s been slinging her family’s delicious heirlooms: recipes to dishes like Goulash, Cabbage Noodles, and, of course, Chicken Paprikash.

If you look up a recipe for the dish, it will seem so simple that you’ll feel concerned an ingredient is missing. Essentially chicken, onions, paprika, and sour cream, it sounds like it could be a bland bachelor stew. In reality, it’s anything but—especially when Nora makes it. 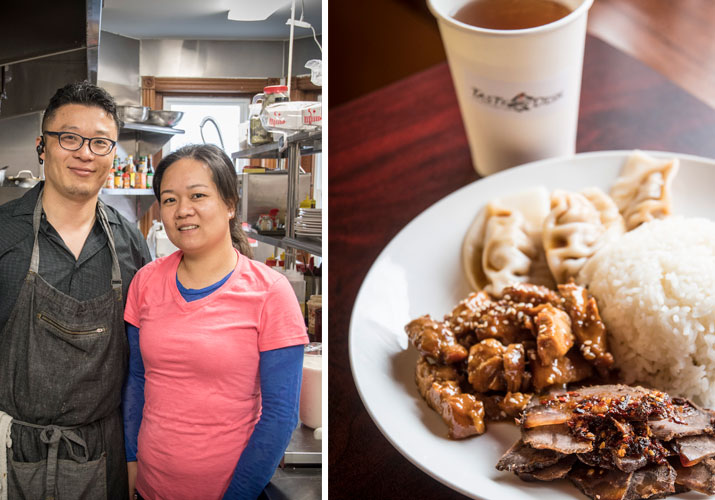 In a venue the size of a postage stamp, you’ll find a delightful ode to authentic Chinese cuisine.

This is not the place to get deep-fried morsels of meat drenched in sugar-laden sauces, so you’re a diehard Panda Express lover, this might not be for you. I was even a little skeptical: I say that I like Chinese food, but until recently, I’d never had authentic Chinese food. It’s a bit like saying that you like coffee when all you’ve had are caramel macchiatos.

Perhaps the antithesis of fine dining, “street food” is the term for food peddled by sidewalk vendors and pushcarts in cities around the world. Thanks to husband and wife Zhiyong Chen and Wen Zhou, dishes from South China have found their way to Hellertown. (Typical clientele includes in-the-know international Lehigh students who dash across town for the couple’s home cooking.)

With a whopping four tables, the small spot serves up savory fare like Hong Shao Chicken (meat braised in soy sauce, Chinese rice wine, and spices), Spicy Cold Beef (sliced beef tendons), or Hong Shao Eggplant Tofu (stir-fried eggplant and tofu). Each dish is a distant echo of what is often packaged to us as “Chinese food,” instead reintroducing familiar flavors in purer forms and more complex combinations. 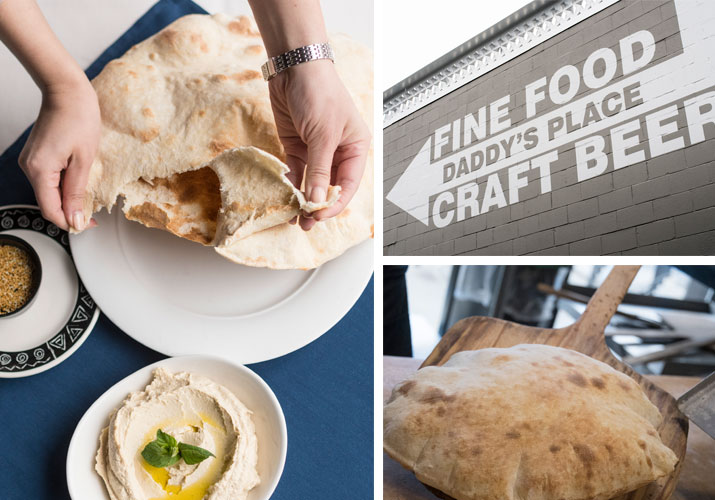 Ingredients like mint, yogurt, garlic, and tahini add a zesty dining option to Easton in the form of tasty Lebanese vittles.

The etymology of the eatery can be traced back to the owners’ then-six-year-old daughter, Rafqa, who referred to it as “Daddy’s Place.”

The restaurant is part beer-lover’s den—there are rows of refrigerators and shelves packed with an overwhelming onslaught of brews—and part casual eatery. Some people pull up a seat inside the relaxed industrial dining room and stay for a while; other people treat Daddy’s Place as a neighborhood bakery, where they stop by to pick up doughy desserts like Baklava or freshly baked bread.

Similar to a pita, the Lebanese Bread is nothing short of life-changing. Fresh out of the oven and fluffy as a pillow, it’s made from scratch to order (and complimentary) when you dine in. Light and addictive, the bread is perfect for scooping up bites of super smooth Hummus. It sounds like an appetizer, but when paired with the bottomless bread, it can easily feed a couple.

As seen in the Summer/Fall 2017 Issue