When Carrie Havranek decided to tackle her first cookbook, her culinary chops were well suited to the task. The Easton-based food writer and editor had plenty of professional experience covering her favorite topic (food!) and she is quite adept in the kitchen. 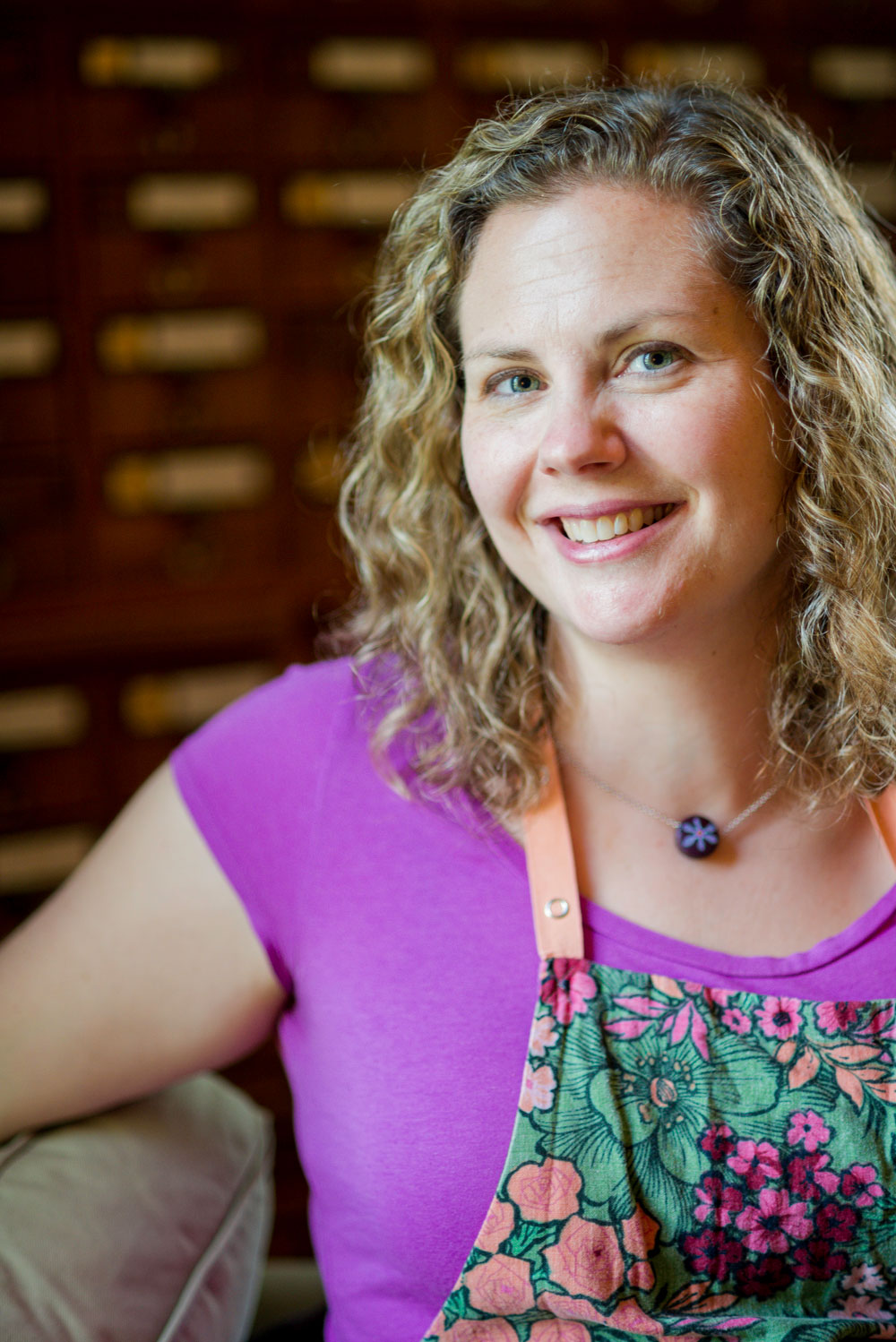 Tasting Pennsylvania: Favorite Recipes from the Keystone State proved to be a multi-year journey that encompassed far more than just writing skills, from testing and adapting recipes to food styling and propping drool-worthy dishes for the photographer.

“It was ‘self-everything’ project,” she laughs, noting that the process was delayed near the end when she broke a finger. However, the efforts paid off when the book was tagged an Editor’s Pick on Amazon shortly after the August 2019 release. Following are a few behind-the-scenes glimpses of her experiences:

What was the spark that started this project?
It was a happy accident. I had been doing a lot of work in the region and was deeply involved in the Easton Farmers’ Market—that was part of my education—but I turned out to be a great candidate based on my experience. [Farcountry Press publishes a series of state-by-state regional specialties.]

How did you acquire the 108 recipes from chefs, bartenders, farmers, and others?
I was one or two degrees separated from many of the sources [in eastern Pennsylvania]. Everybody else I just contacted cold—and only one person turned me down!

What was the timeline like for testing and photographing the recipes?
I was testing them in batches—things that looked funky I would test ahead of time before making them to shoot. Sometimes I had to test a few times, and most recipes needed to be adapted. The recipes had to work, so I’d talk with the chefs and go back and forth with them to tweak or troubleshoot. [Note: Restaurant recipes can be challenging to “translate” into home cook-friendly formulas. Issues that arise may include accessing ingredients not readily available to non-pros or reducing enormous yields to family sizes.]

Where did you and the photographer work?
In the kitchen of my house. All the props lived in my basement on shelves. It was kind of like living in a set.

Did you have the cookware, dishes, and other props on hand?
I had a lot of it, but Alison [Conklin, the photographer] brought some. And I had a lot of boxes from Crate & Barrel delivered to my house that year!

Were food styling substitutes for actual foods needed, such as making non-melting “fake” ice cream?
No, there was no time or budget for any kind of trickery. Whatever we needed to do, we figured it out. Sometimes it was a matter of having a dish of brown food and deciding how to make brown food look good. They all had different challenges, but brown food was a big one.

Was there any one recipe that was the biggest surprise to you?
The Pennsylvania Onion Tart from [food historian and cookbook author] William Woys Weaver is a prime example of traditional dish that most people don’t know about. It tastes like a quiche in a slightly sweet pizza crust and is incredibly filling. It’s familiar yet unfamiliar at the same time, and it’s something I would make again, especially for a brunch.

Is there any restaurant in western Pennsylvania you really want to visit in person?
A bunch of them! I’d like to check out The Butcher and the Rye in Pittsburgh—the Salinger’s Sling cocktail is from there—and Apteka [also in Pittsburgh] because it’s Eastern European and I feel connected to that food. [They contributed the Kluski Slaskie (Potato Dumplings) recipe.]

Did you gain weight while preparing all these dishes?
I have no idea—that’s an occupational hazard working with food, but I try to stay active and don’t worry about it too much.

Did your kids have a favorite recipe?
Probably any baked goods!

What do you most want people to understand about Pennsylvania cuisine?
We have a long agricultural history that is really important to respect and foster and take care of. People can do that by the way that they shop and cook. I believe that we have the resources to be very sustainable in how we eat. This might sound ridiculous, but I think we’re the California of the East Coast. We might not be at their level of food consciousness, and we’re never ever going to have citrus or avocados—but we have farms and bounty, and we should celebrate that. 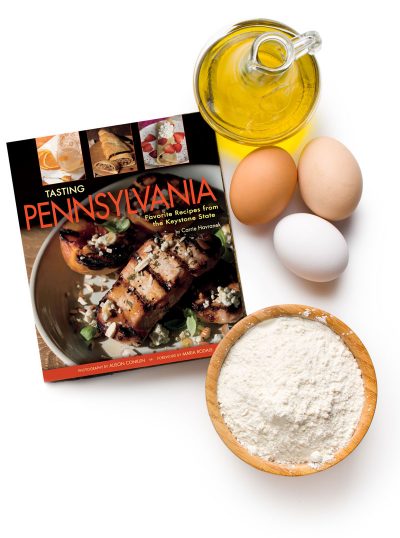 In a small bowl, dissolve the yeast in the warm water and let stand for 5 minutes.

Lightly spoon the flour into dry measuring cups and level with a knife. Combine the flour, sugar, baking powder, baking soda, salt, rosemary, and thyme in a large bowl. Cut in the shortening until the mixture resembles coarse meal. Add the yeast liquid and then the buttermilk and stir just until moist. Cover and chill for 1 hour.

Turn the dough out onto a heavily floured surface and knead lightly five times. Roll the dough to 1/2 inch thick and cut with a 2 1/2-inch biscuit cutter. Place the biscuits on a greased baking sheet and freeze for 10 to 15 minutes to firm up slightly. Brush the melted butter over the biscuit tops. Bake until golden, 10 to 12 minutes.

Remove from the oven and transfer to wire racks to cool completely. The biscuits are best the day they are made but can be reheated gently or toasted for a day or two afterward. 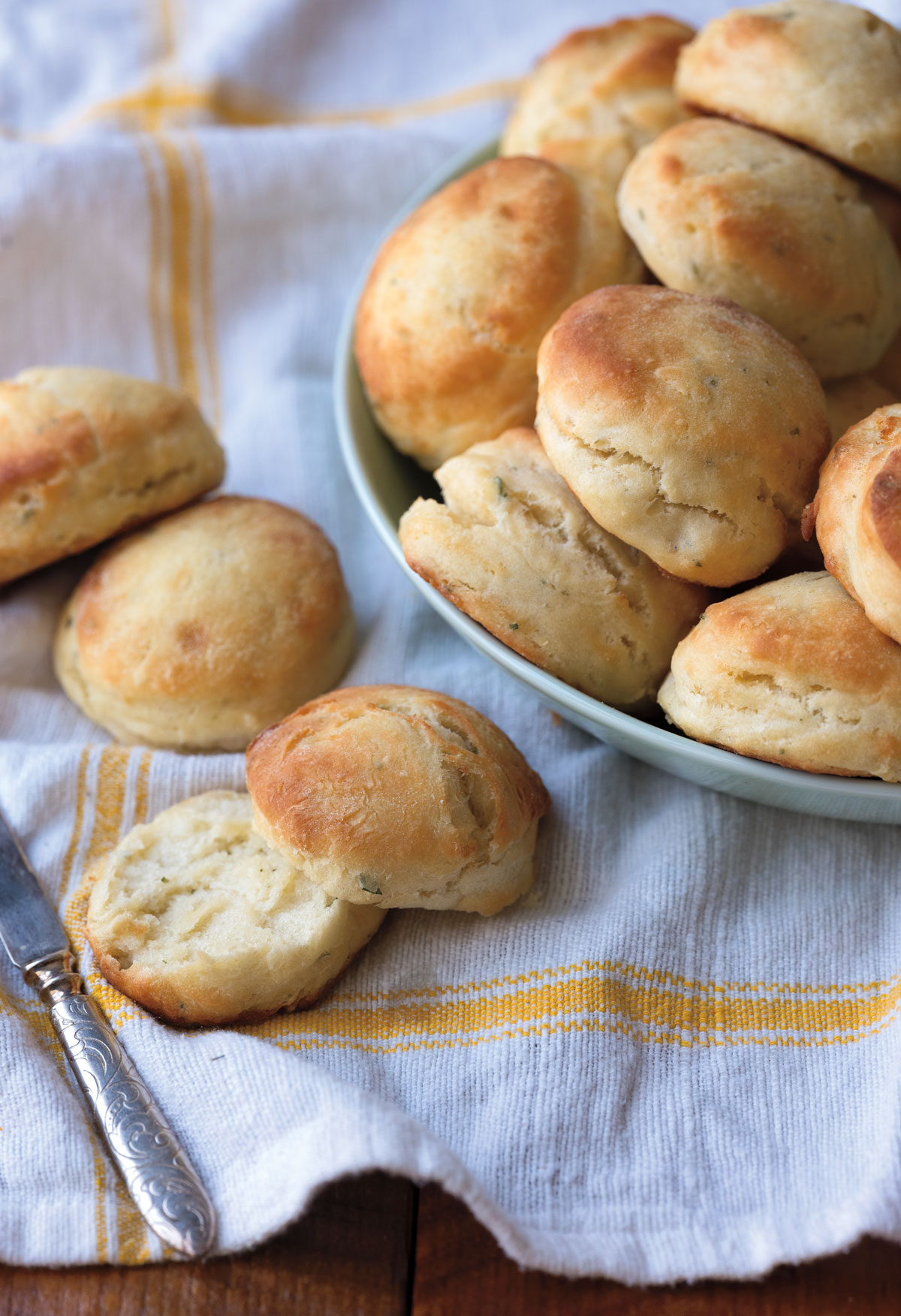 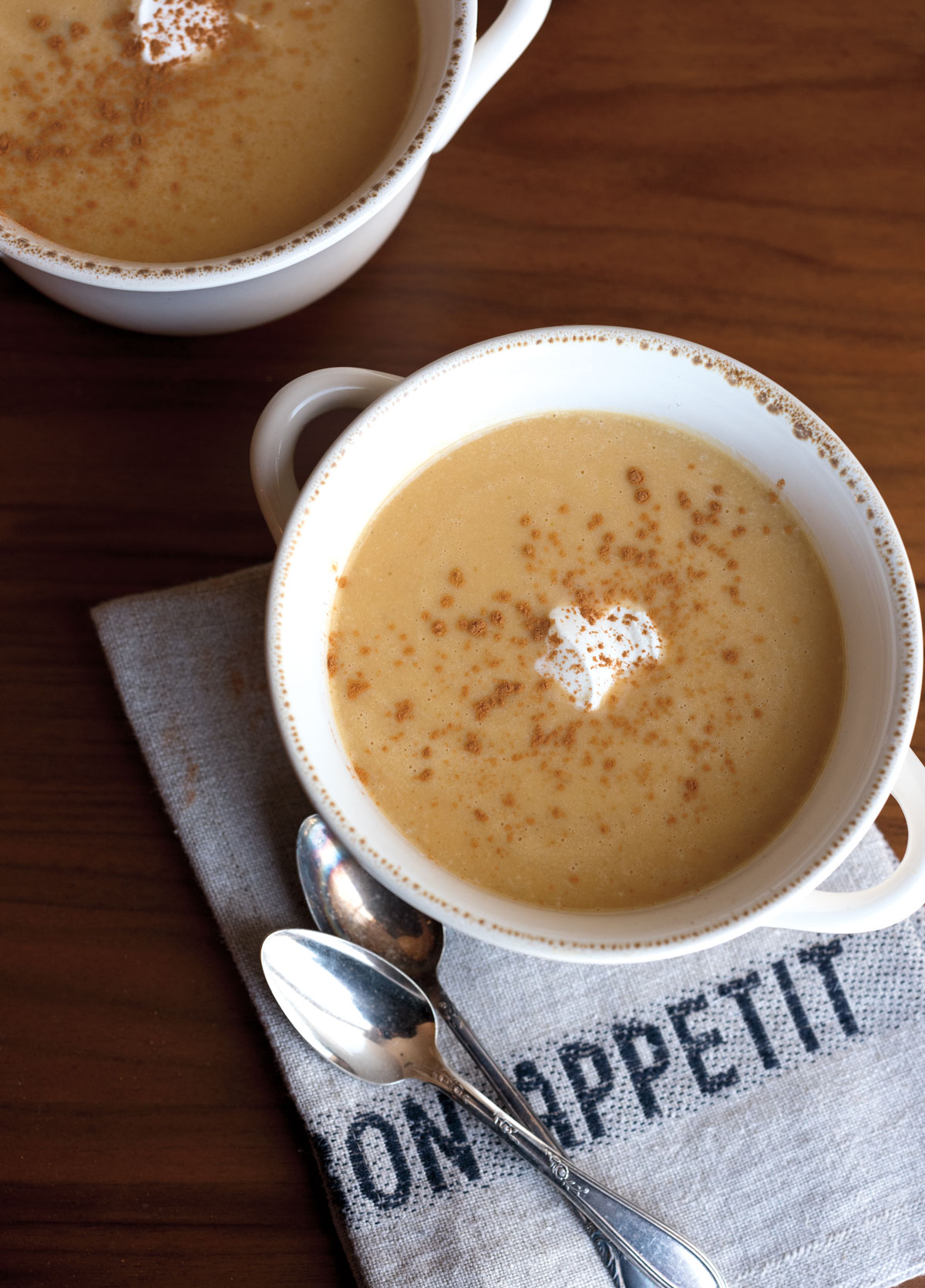 In a large stockpot, sweat the onions with butter or oil until soft, 5 to 7 minutes.

Add the squash and sweet potato, then the ginger, salt, pepper, cinnamon, allspice, cardamom, nutmeg, and sage. Add enough liquid to barely cover the vegetables. Bring to a boil, cover, and reduce to simmer until the vegetables are just soft, 15 to 20 minutes. Stir occasionally to prevent sticking.

Once the vegetables have softened, add the cream and gently heat. Purée the soup with an immersion blender (or pour into a blender and purée). If desired, strain through a sieve for a smoother soup.

Garnish with a dollop of the cinnamon-spiked sour cream and serve hot.

Combine the butter and peanut butter in the bowl of a stand mixer fitted with the paddle attachment. Cream together briefly to incorporate, just a few seconds. Slowly add the powdered sugar, mixing at low speed. If the mixture is too tacky, add more powdered sugar. If it’s too dry, add a little more peanut butter. The dough should be pliable but firm. Cover and refrigerate the dough for 1 hour or up to overnight.

Remove the dough from the fridge. Scoop out a walnut-sized chunk of dough and roll it into a ball. Transfer to a rimmed baking sheet lined with wax paper; repeat with the remaining dough. Cover and refrigerate for 1 hour.

Melt the chocolate chips, vanilla, and oil in a double boiler. Using skewers or toothpicks, dip the peanut butter balls three-quarters of the way into the chocolate, leaving the top exposed to look like a buckeye. Transfer to parchment or wax paper to dry and harden at room temperature (in hot weather, you may need to refrigerate them). 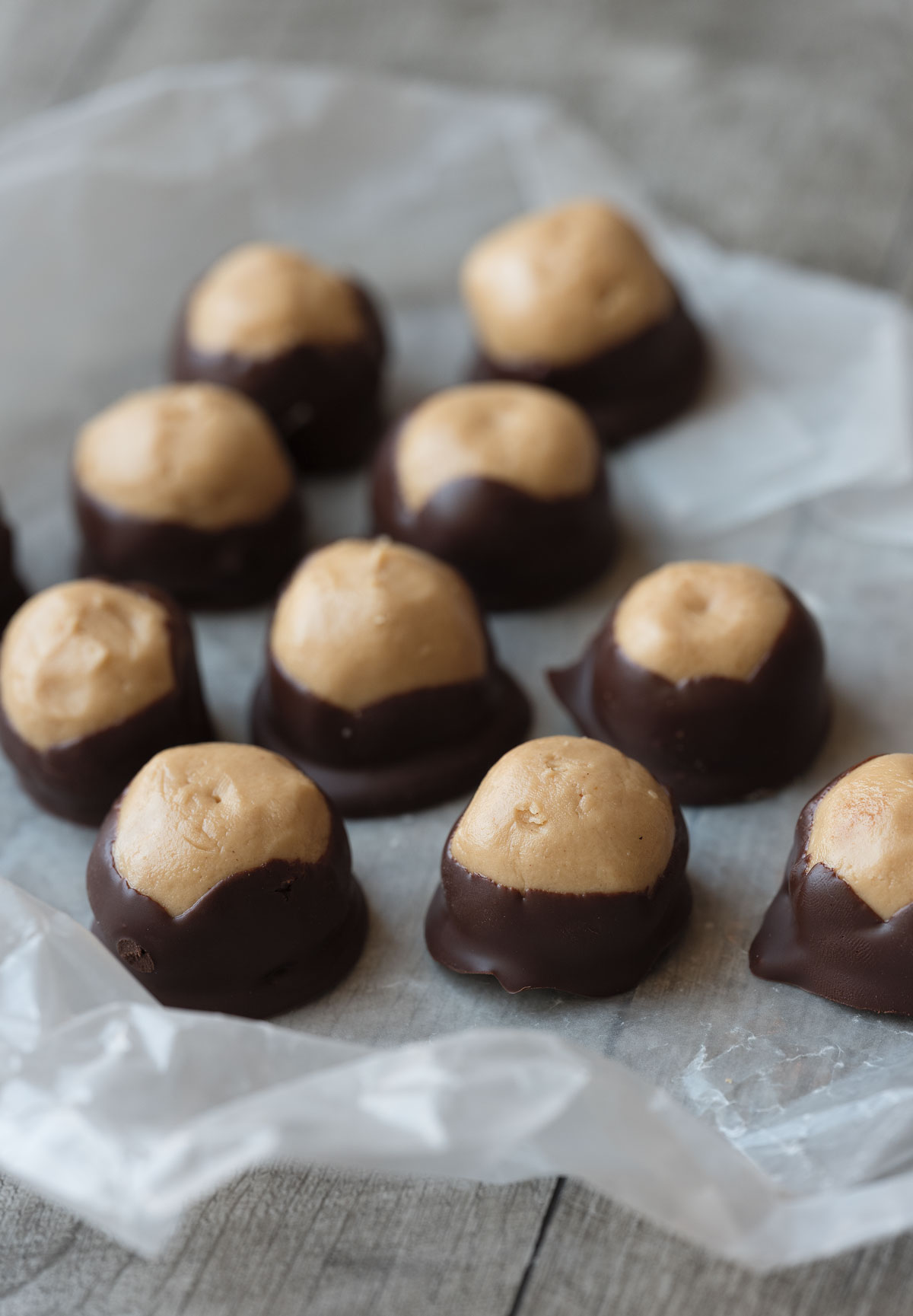 As seen in the Winter/Spring 2020 Issue