The name Jurgielewicz may not set your mouth watering. But it should. Many leading chefs consider Joe Jurgielewicz & Son synonymous with the best ducks available on the market. “Our duck has an ideal meat-to-fat ratio resulting in very flavorful meat and cooks to a crispy skin, ideal for many famous duck dishes,” reports Joey Jurgielewicz III, director of client services and eldest son of the founder and CEO, a Cornell University-trained veterinarian known to most people simply as “Dr. Joe.”

Although flavor remains a foremost consideration to both professional and home cooks, this fourth-generation family business sets industry standards for duck health and welfare. Their humanely raised flocks are housed in modern, climate-controlled free-roaming barns where they have access to clean deep-well water and are fed a hormone- and antibiotic-free diet of nutritious corn and soybeans—much of which is grown on the 500-acre property in Shartlesville (bordering Hamburg), where eco-friendly and sustainable practices have been applied since the Berks County farm’s purchase in 1983. The remainder of the food needed to meet the ducks’ needs is grown and processed within the state. “A happy and healthy duck makes for a tasty duck,” Joey states. In fact, the company’s website is tastyduck.com

The original Jurgielewicz Duck Farm was founded by Bronislaw and Katarzyna Jurgielewicz in 1933, when they emigrated from Poland to America. The farm was located on the sandy shores of rural Moriches, Long Island, and became one of the leading duck farms in the famous Long Island Duck Co-Op. By the late 1970s, rising real estate taxes, increasingly strict environmental regulations and skyrocketing land values forced many duck farms to sell out to developers or close. Bronislaw’s son, Joe Sr., retired from the business in 1980.

However, after completing his degree in Veterinary Medicine, Dr. Joe decided to follow the family tradition of duck farming. He persuaded his father, Joe Sr., to come out of retirement and they together searched for a new site in a “farm-friendly state”. When the bucolic Shartlesville location became available from Met Ed, the Jurgielewicz family moved from Long Island to the rolling hills of Pennsylvania Dutch country.

The only type of duck raised is Pekin (not to be confused with Peking duck, which is a traditional Chinese dish), a breed brought here from China in 1873 that now accounts for about 95% of commercially raised ducks in America. These domesticated birds, which do not fly, are favored by Americans for a mild taste, which is not gamey or greasy. The Jurgielewicz duck is directly descended from the original ducks brought from China. 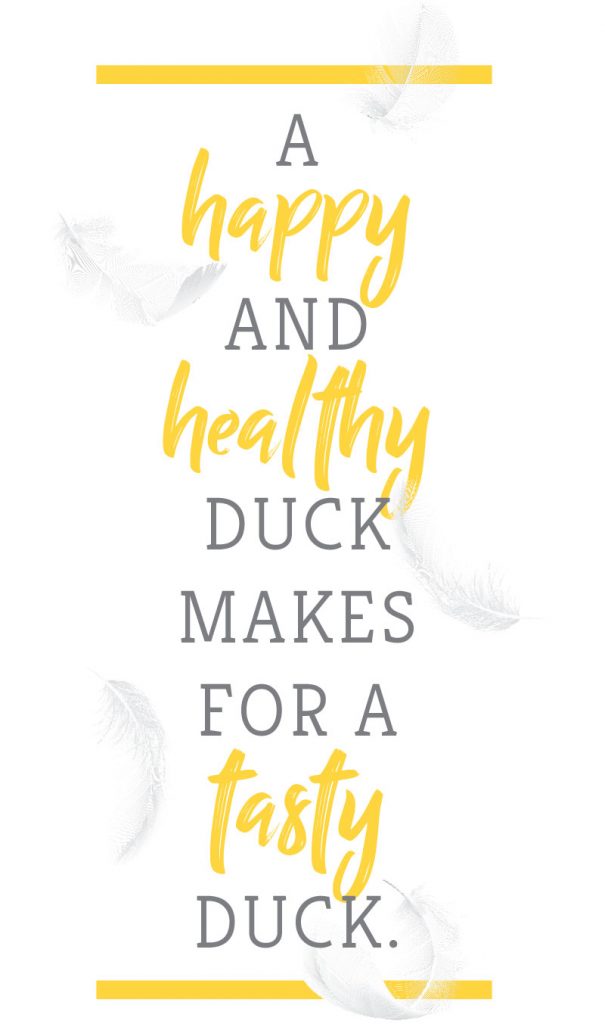 About 200 people are now employed in the Shartlesville operation, and the staff includes teams of highly skilled specialists, including Zack Lowman, head of genetics, who works in the breeder department, and Ian Shollenberger, a “duck educator” working in sales. Additionally, a second full-time veterinarian was added after Dr. Joe’s second son, Jim, received his degree in 2015. (There are also two other younger sons who chose not to work in this field, though all four boys were directly involved in the farm as they grew up. “We were the kids who hated snow days,” Joey recalls. “That’s because our father woke us up earlier since no one could make it to work due to the snow, so we were picking up duck eggs or bedding the barn.”)

To expand the operation, Jurgielewicz began partnering with nearby family farms to raise ducks in 1985. There are now twenty-eight Family Duck Farmers across southern Pennsylvania, with one in Maryland. Trained company employees directly supervise these farmers and identify and recruit additional growers as needed. Ducklings arrive from the sophisticated hatchery at a few days old. When the mature ducks leave these farms to return to Shartlesville for processing, Joey notes that—unlike chickens and turkeys—they’re not just picked up, thrown into a box, and put on a truck. “We have special trailers made just for ducks. When they’re loaded into them, they walk on themselves. That’s more humane and very low stress,” he says. The timeline from hatching to processing is typically 38 days, though sometimes up to 52 days depending on whether the market is calling for smaller or larger birds. 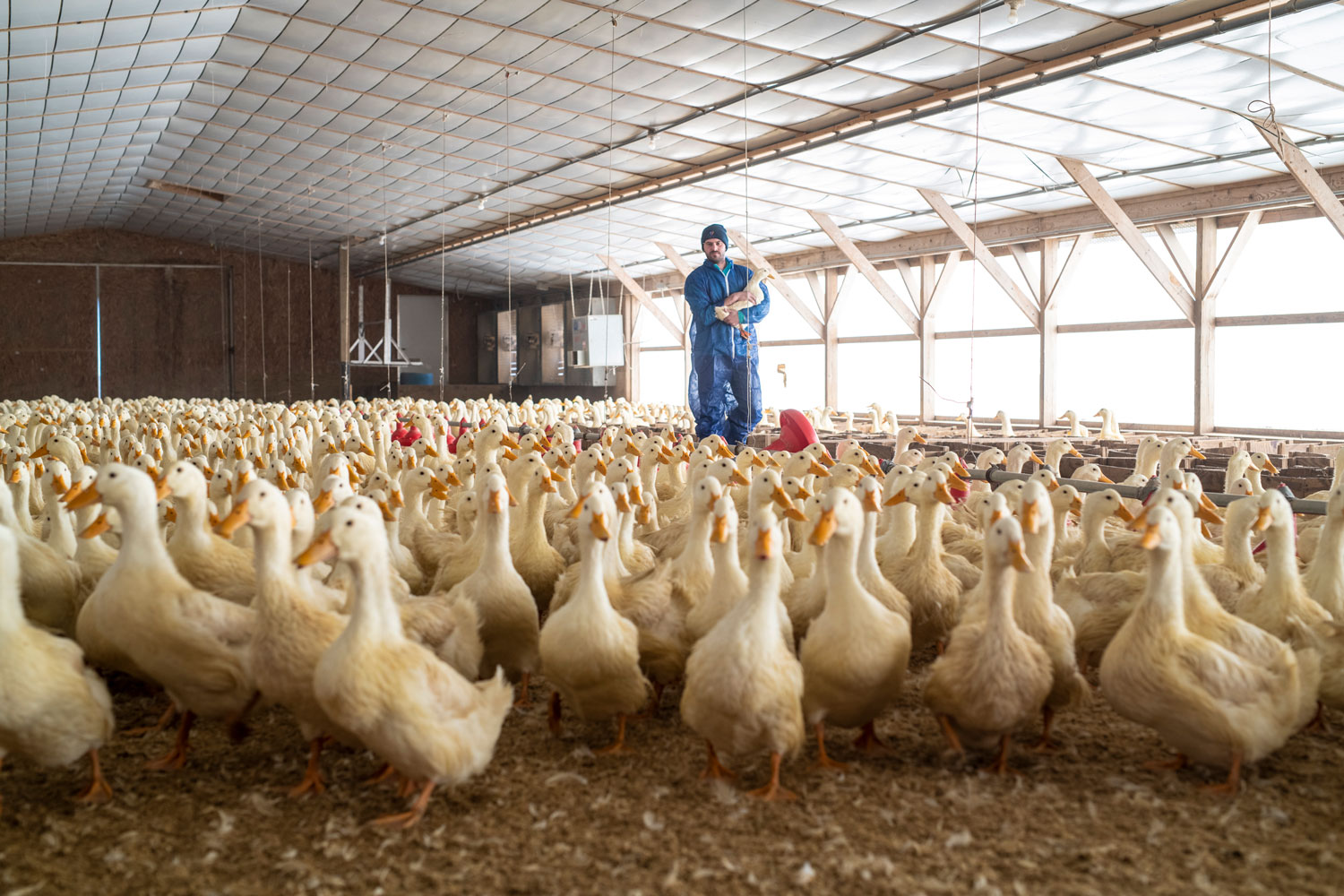 Approximately 5 million ducks per year are processed before being sent to distributors, restaurants, and consumers across the U.S. “We also ship our duck to global markets in the Caribbean, South America, the Middle East, and to cruise lines and resorts,” Joey adds.

Local client restaurants include Maxim’s 22 in Easton and Glasbern Inn in Fogelsville. They are usually featured on the menu at Savory Grille in Macungie, where chef/owner Shawn Doyle has hosted special dinners that introduce guests to different parts of the duck across multiple courses. Jason Hook of H2O Kitchen, a private dining, catering, and consulting company, has been a long-time supporter and advocate of these special ducks.

Jurgielewicz ducks can also be found in New York City at Tao and Eleven Madison Park, along with dozens of barbecue restaurants scattered throughout Chinatown. (Duck is hugely popular in Asian culture, which comprises a large segment of the market.) In Washington, D.C., they are featured prominently at Peking Gourmet Inn, and also served at Wolfgang Puck’s The Source and ChiKo. Those vacationing in Florida can choose from several duck dishes on the menu at the new and ultra-stylish Morimoto Asia restaurant at Walt Disney World Resort. Anyone seeking an at-home experience may purchase these ducks at Giant Food Stores, Weis Markets, and Mr. Bill’s Poultry Market in Allentown.

The website, though, offers the largest variety of duck products. Whole ducks, fresh or frozen, are also available in halal and kosher versions. Raw duck legs and wings can be ordered separately, along with cooked and ready-to-eat duck leg confit and artisanal hand-cut duck sausage. Specialty items range from carcasses for making stock and rendered fat for cooking to more esoteric tastes like duck tongues—currently a super-trendy item for making tacos.

One of the fastest growing products, though, is the skin-on duck breast. “Having that pan-seared, it can be compared to any protein out there,” Joey says. “You could hold it up next to any filet mignon and I think you’d choose the duck breast over it.”

Nutritionally, duck stacks up well. A 3 1/2-ounce portion provides 25 grams of protein, is rich in zinc and selenium, along with vitamins B5 and B12 (niacin), iron, phosphorus, and riboflavin. And it contains less than 200 calories, with zero carbohydrates.

More unexpectedly, Jurgielewicz ducks may also be helping to keep you warm and comfy: The company takes pride in finding use for virtually every byproduct, and the feathers are sold to leading companies that make down bedding and jackets. “We have a ‘traceable down’ certificate showing that these birds were humanely raised and processed,” says Joey. Therefore, consumers can feel good about the usefulness of the ducks long after that satisfying duck dinner is a happy memory.

Find a BONUS recipe for Whole Roasted Duck with Spiced Cider from Chef Jason Hook of H2O Kitchen at lehighvalleygoodtaste.com/duck. 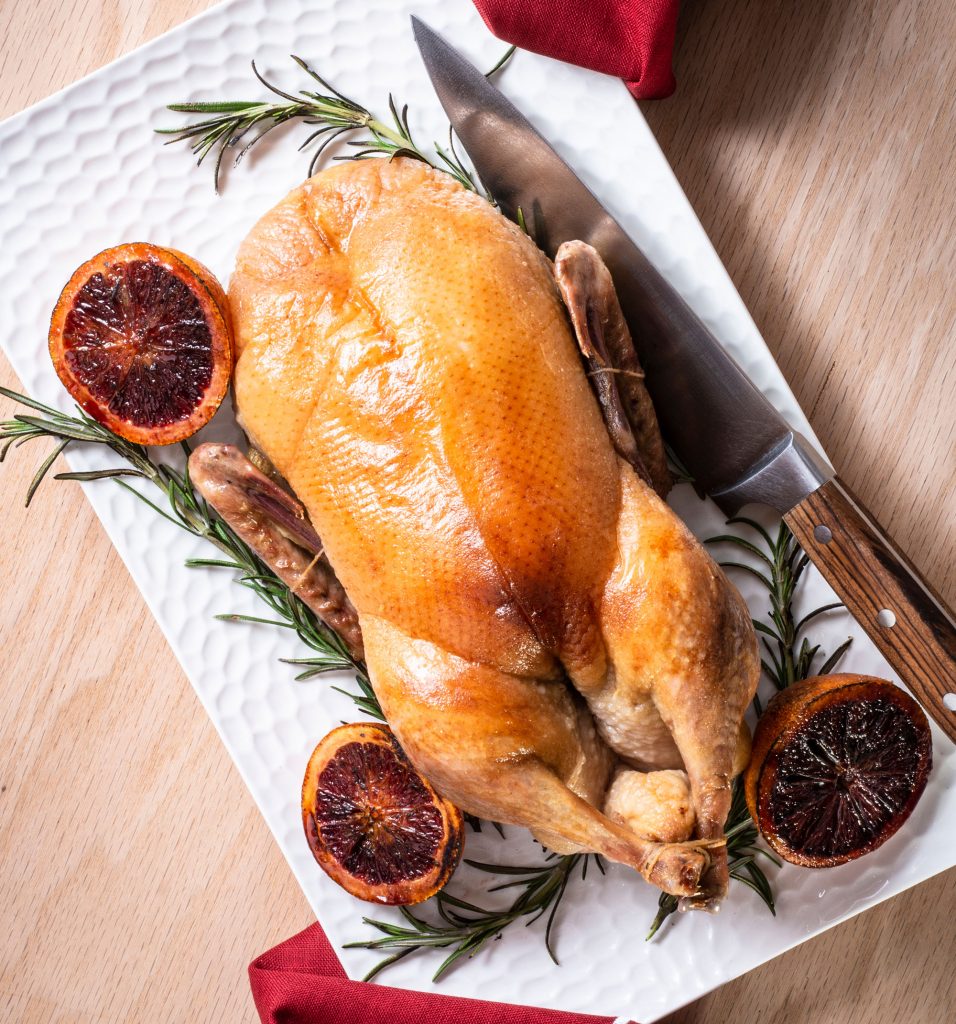 As seen in the Winter/Spring 2019 Issue