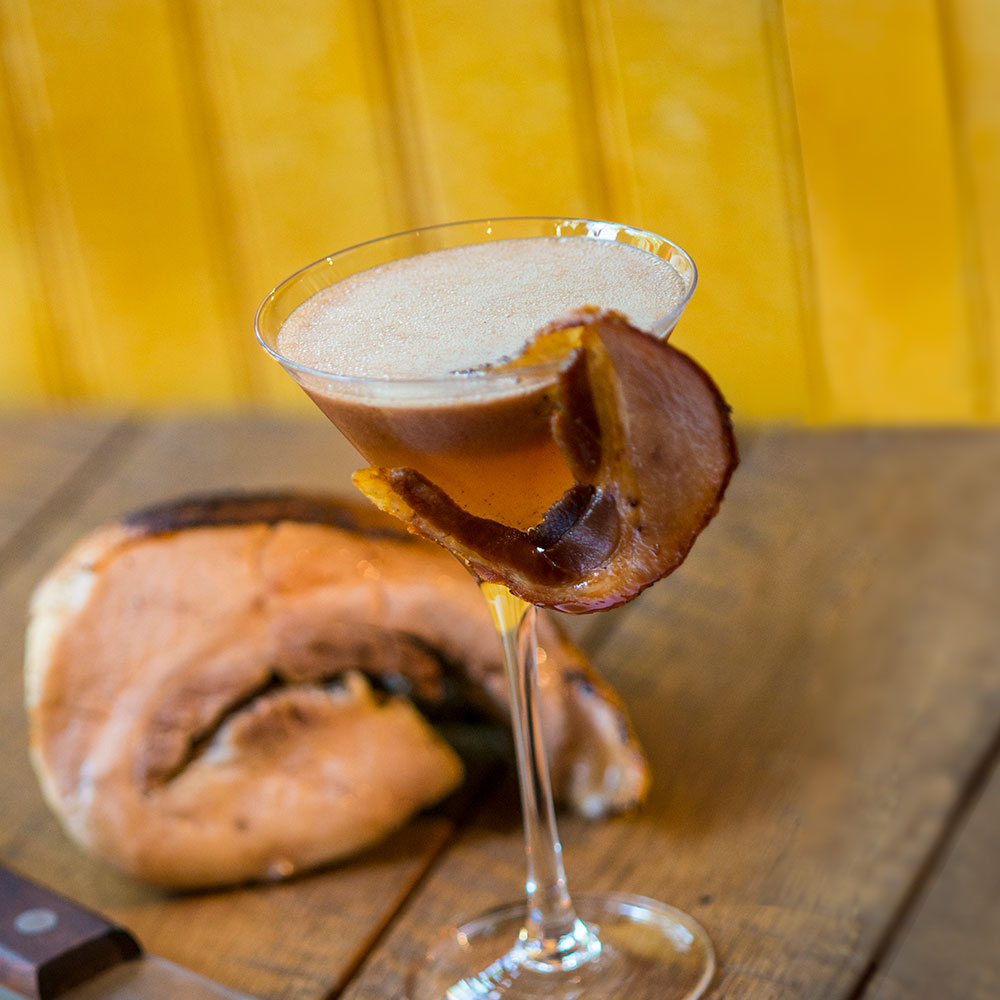 On your plate or in your glass, this food phenom keeps on sizzling

Once the star of breakfast, bacon would occasionally venture to the dinner table wrapped around scallops or chicken livers, or guest star as a topping on a fully loaded baked potato. Nowadays chefs are pushing the boundaries on the ways that dishes can baconated – including desserts, such as cream cheese puffs topped with chocolate-coated bacon at Spinnerstown Hotel and bacon swirl ice cream scooped up at ArtsQuest’s Bacontopia, one of two annual bacon-based celebrations hosted in the Lehigh Valley.

Savory sensations range from bacon-wrapped meatloaf at the Grille at Bear Creek to the house-smoked bacon rasher appetizer, a one-inch thick slab of bacon with a sweet and spicy kick, at Emeril’s Chop House. Thick and streaky pork belly, which is uncured and unsmoked bacon, has gone hog wild on menus, such as Savory Grille’s succulent version served with maple-celery root puree (visit LehighVallyGoodTaste.com for recipe) and a pork belly BLT offered at Twisted Olive. “Pork belly is to bacon as bread is to toast,” explains Chef Jeremy Bialker of Two Rivers Brewing Company.

Mixologists, too, are shaking up drinks with baconized beverages. Sette Luna’s Bloody Sunday, sports a ring of pancetta – Italian unsmoked bacon – on the side (visit LehighVallyGoodTaste.com for recipe) and Emeril’s Chop House has even developed their own bacon-infused bourbon for a signature cocktail. At Easton Farmers’ Market whole-hog Baconfest, Black & Blue poured garlic-infused Bloody Marys splashed with Bakon Vodka – a surprisingly vegan spirit – and Two Rivers created Maple Bacon Brown Ale for the occasion.

Two Rivers, in fact, may be the most porkcentric restaurant in the Lehigh Valley, even offering a bacon happy hour each Wednesday. Among the hog-heaven items on the menu are a Porque Madame Sandwich, a Peanut Butter Bacon Cheeseburger and bacon béchamel. Their Pork Board features five versions of bacon from Breakaway Farms, including cider-braised pork belly, peppered bacon and bacon jam. “The sky’s the limit,” says Bialker. “Pork fat adds flavor and it’s palatable.”

Bialker is also a big fan of infusing sweets with bacon in such items as bacon-wrapped brownies and smoked bacon pecan clusters. “The sweet and salty complement each other. That creates a full mouth flavor,” he says.

When you’re ready to bring home the bacon, look for products from local producers for superior quality and flavor, such as Breakaway Farms and Rainbow Farm, both of which sell multiple varieties of bacon at the Easton Farmers’ Market, from cherry-smoked and honey-kissed to nitrate- and sugar-free versions.

Nolan Thevenet, who raises heritage-breed Tamworth hogs on his 47-acre Stryker Farm, is also passionate about producing meats that are antibiotic- and hormone-free. His hogs enjoy a happy life foraging in the forest before going off to market. “Tamworth is a breed that was common a hundred years ago. They still have mothering instincts and they still put on a sufficient fat cover that keeps them warm in the winter,” he says, noting that the taste is clean and intense and the color is a deeper red than supermarket pork.

Thevenet reports that his butcher makes the bacon with a dry-rubbing process. “The salt, sugar and honey are actually rubbed on the surface of the belly to flavor it. That’s superior to grocery store bacon which is soaked in a brine. When you do that the bacon absorbs a lot of water, so when a person takes it home and cooks it, it shrivels in the pan. The dry rub process evaporates the moisture out of the bacon, so you’re getting more meat for your dollar,” he explains. Find Stryker Farm bacon at the farm store in Saylorsburg, Nature’s Way in Easton and Pure Sprouts, a grocery delivery service in Allentown.

Other high-quality bacon can be found at Peters Brothers Meat Market, which has a shop in Lenhartsville and a stand at the Allentown Fairgrounds Farmers Market. The business launched in 1940 and they now sell 500 pounds of bacon per week. “We use an all-natural hardwood smoke – we burn hickory and oak sawdust to produce the smoke,” says third generation co-owner Rex Peters. “The smokehouses are high-technology and I had to go to Germany to buy them. The United States is now coming on board, but in Germany everything is at a much high level in their processing.” The smokehouses use a closed-system that recirculates the smoke rather than blowing it into the air. “We were the first in the United States to have a closed-system smokehouse,” he continues. “Although we’re old-fashioned Pennsylvania Dutch, but yet we like to use technology. Everything in the smokehouse is computer driven. I can actually monitor the smokehouse from my computer at home.”

The smoking process takes about twelve hours. “We’re a federal-inspected meat facility and there are parameters you have to meet according to the USDA. There are certain temperatures that have to be maintained for a certain length of time to ensure you kill trichinosis,” Peters says.

The laws of supply and demand apply to the bacon market. “Bacon unto itself has just gone through the roof in the past year and the price of bacon has gone straight up,” Peters says. “That almost the highest value of the pig right now. On the wholesale level a pork belly costs more than a tenderloin.”

Since the bacon trend doesn’t show any signs of slowing down, this everyday item is moving into the luxury category. So when you pop that piece of crispy bacon in your mouth, consider it a gourmet treat.

In a small bowl, mix potatoes with chipotles and olive oil. Set aside. In a large skillet, cook bacon over medium heat until brown and crisp. Remove bacon and drain on paper towels. Discard grease from pan, reserving 2 tablespoons. In a medium bowl, mix dulce de leche, raw egg and adobo sauce until smooth. Stir in mustard, salt, pepper and flour. Gradually whisk vinegar and water into mixture until thoroughly blended. Over medium heat, return reserved grease and half of bacon to skillet. Pour egg mixture into pan and cook several minutes until dressing thickens, slowly adding a few tablespoons water to thin as needed. Cover and reduce heat to low. In a large bowl, toss greens, potatoes and remaining bacon. Divide salad among four plates. Drizzle a generous portion of the dressing over each serving, topping every plate with slices of hard-boiled egg and cracked pepper. Serve at once.